How do you talk about depression without it sounding, well, depressing?!
Winston Churchill referred to depression as a “black dog”.

He wrote:
“I think this man [a German doctor] might be useful to me – if my black dog returns. He seems quite away from me now – it is such a relief. All the colours come back into the picture.” 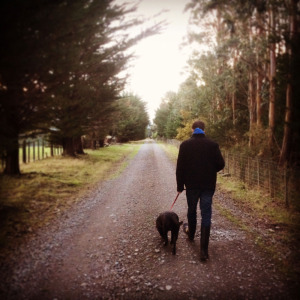 It’s coming up three years since my ‘black dog’ started following me around, but things are definitely better.
(I don’t want you to be confused by our literal black (and white) dog who is such a sweetheart and the picture for this page, though)

Instead of pretty much all of my time being filled with feelings like those mentioned below, it is down to certain moments, certain days, certain triggers.
It’s taken an epically, amazing husband – who I really just don’t have words deep enough with which to appreciate him – a seemingly endless number of days, multiple attempts, failures, and more attempts to improve my body chemistry, a great deal of pain, an incredible counsellor, a handful of other people, an awful lot of prayer and an Almighty God to get me to where I am today.

This journey has been hideous. It has been ugly. It has been exhausting, heartbreaking, and to me, the most painful, concentrated suffering of my life.

For me, my depression was/is fed by the consequences of my own actions. Coming from this perspective I felt that I had no one to turn to. No one who would understand my perspective. Who was I to be needing help? But this journey has also shown me that there are countless others in the same situation. There’s a saying:

“You made you’re bed, now you have to lie in it.” That’s definitely true, but when you’re lying in that (metaphorical sick) bed, it’s nice to have visitors

– to have people tell you stories about how it all works out ‘happily ever after’. Even when you’re staring blankly at the ceiling, it’s nice just to know there’s Someone else in the room with you, that you’re not alone.

If you are reading this, I want you to think deeply about the people you know – this might even BE you.
Think about the ones who have maybe silently drifted away – or maybe they’ve suddenly disappeared from your community.
The ones who bail out of social gatherings – the ones who answer the “How’re you?” with “Just tired, lately”, or “Getting there”.

The more we understand what people are going through, the more thought we can give to how we treat one another.

What Can Be Happening on the Inside:

But it’s not YOU.
You may be depressed, but you are not depression.
It does not make you.
It’s chemical. It’s emotional. It’s mental. It’s physical. It’s spiritual.

I was having a conversation with someone at one point in this journey. They asked how I was and I mentioned that I wasn’t feeling very motivated lately. They said, “that’s not like you”. Unbeknown to them, it brought me to tears. It was such a relief to feel that somebody noticed!

God notices. He cares. When it seems like there’s no one who can possibly understand you, or how you’re feeling, He does!
It’s taken me a long time to even be able to say that again with such certainty and belief.

What You Can Do (for yourself, or in support of another person):

1. Seek God.
2. Seek counselling – sometimes we don’t have the tools within ourselves to deal with the issues we’re facing, we need help.
3. While you wait, get St. John’s Wort, Vitamin B and Ester C tablets from the chemist/supermarket – follow the dosage instructions.
4. Drink water.
5. Adjust your diet to include (more) Tryptophan (found hugely in tofu, roasted pumpkin seeds, gluten flour, sesame seeds, almonds…), Omega 3 (great sources are flaxseed/linseed oil, ground flaxseeds, walnuts…), Folate (black-eyed beans and lentils are a great start) and B6 (capsicum is a great way to add this to your diet).
6. Avoid speaking negatively.
7. Go for a walk (or some sort of exercise), get some fresh air.
8. Have a shower – this is a remarkably huge action you can take.
9. Try to have regular sleeping times.
10. Listen to classical music – just set some playing in the background when you can (eg. in the car, in the shower, when you first get home…)
11. Talk to someone you trust – they will ask the typical “How are you?” stuff… answer them honestly.
12. Remind yourself of scripture (even if you’re struggling to apply it to yourself, like I did); it’s one of the best things you can do.

Verses that I kept close to me:
Romans 8:28 – And we know that all things work together for good to those who love God, to those who are the called according to His purpose.
Isaiah 58:9-11 – Then you shall call, and the Lord will answer; You shall cry, and He will say, ‘Here I am.’ “If you take away the yoke from your midst, The pointing of the finger, and speaking wickedness, 10 If you extend your soul to the hungry And satisfy the afflicted soul, Then your light shall dawn in the darkness, And your darkness shall be as the noonday. 11 The Lord will guide you continually, And satisfy your soul in drought, And strengthen your bones; You shall be like a watered garden, And like a spring of water, whose waters do not fail.
Jeremiah 29:11 – For I know the thoughts that I think towards you, says the LORD, thoughts of peace and not of evil, to give you a future and a hope.
2 Corinthians 4:16,17 – Therefore we do not lose heart. Even though our outward man is perishing, yet the inward man is being renewed day by day. For our light affliction, which is but for a moment, is working for us a far more exceeding and eternal weight of glory,
Romans 12:12 – …rejoicing in hope, patient in tribulation, continuing steadfastly in prayer;

He is with you through each peak and valley of your life. And if you need me, I’m here too.
Deuteronomy 31:8 – And the Lord, He is the One who goes before you. He will be with you, He will not leave you nor forsake you; do not fear nor be dismayed.

If you want to talk about what you’re going through (be it for yourself or someone you know), you are welcome to message me on Facebook or add your own comments at the bottom of this page. I moderate them, so they are automatically private (and can stay that way if you wish).
I want this blog to be a safe place for you.

Now may the God of hope fill you with all joy and peace in believing, that you may abound in hope by the power of the Holy Spirit.
– Romans 15:13

Let’s be there for each other xx

Living one day at a time;
Enjoying one moment at a time;
Accepting hardships as a pathway to peace;
Taking, as Jesus did,
this sinful world as it is,
not as I would have it.

Trusting the You will make all things right
if I surrender to Your will
so that I may be reasonably happy in this life,
and supremely happy with You forever in the next.