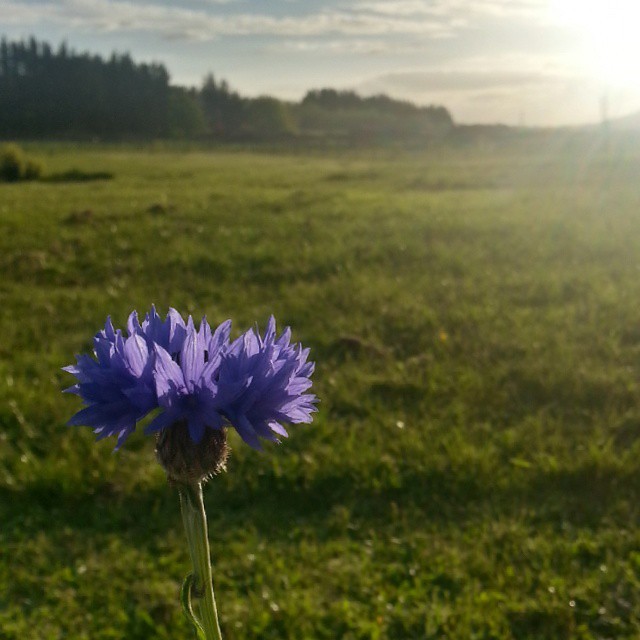 A chat with my mum taught me this latest lesson from nature.

To set the background for you:
I have several blue cornflower plants lining our driveway (along with lavenders and wildflowers).
The flowers are stunning and I’ve taken great delight in seeing each bloom come up. Each plant, currently, has about 8 flowers bursting forth with their brilliant blues. It’s such a blessing to see every time we go anywhere.

We also have a hare. If you’re not sure what that is… well, in my opinion, it’s a leaner, much larger, possibly more destructive version of a rabbit. Don’t be confused though, this is not a pet hare. This is a run-of-the-mill ‘you live in the country now’ kind of hare.

My lavenders have felt the hare’s destructive power as it just snaps off branches and leaves them lying on the ground, right next to the plant it came from! I had found this bad enough. Frustrating, even. I don’t think I would have minded so much if the hare had at least taken the twigs away somewhere… out of sight, out of mind, so to speak. But the hare just leaves them RIGHT THERE, for me to see.

So we came home one afternoon and I noticed one of the flowers on the grass. I went over to find that almost half of the entire plant had been snapped off and dropped a mere few centimetres from the original. Annoyed was a slight understatement.

I picked the broken plant up – it had one beautiful flower out, with another 6 or so buds waiting to pop. And I know they’re ‘only plants’, but these were the first lot of flowers that I had planted since we’ve moved here. So I walked with this broken bunch, back to the house. I couldn’t bare to just throw it away, so I shoved it into one of the flower pots I have up on the deck – I would deal with its disposal at another time.

The next day, it had wilted slightly, and I mournfully showed hubby the new little buds that would never open – there was the tiniest amount of blue that you could see trying to open, but this just made things even sadder.

The day after that, I noticed more blue patches on this broken cornflower. The one flower, that was already open, was starting to fade but the other little buds had opened further… it was still growing!!

Now the conversation with my mum comes in… albeit briefly. It was in retelling this story to her, that I finally saw the lesson that God was showing me through it (and I can tell you, I have been resistant in hearing it!). This whole time, I had seen nothing but sorrow, followed by a little bit of wonderment as the flowers continued to bloom.

In this, I suddenly saw part of my own experience of feeling ripped away from everything I knew, everything that fed me and the people that cared for me… being separated from the people and things that gave meaning to my life. But it also showed me, that there is life to be found in many places. God, Himself, is not only found in one building, with a select group of people. He is everywhere. We can keep growing, even if our friends change or we move towns, or however our circumstances change.

What this little cornflower is teaching me (what Christ is teaching me through it) is that you can keep growing when change happens, as long as you’re roots are in the right stuff.